The exchange rate of bitcoin on exchanges for the first time since March exceeded $ 9,400 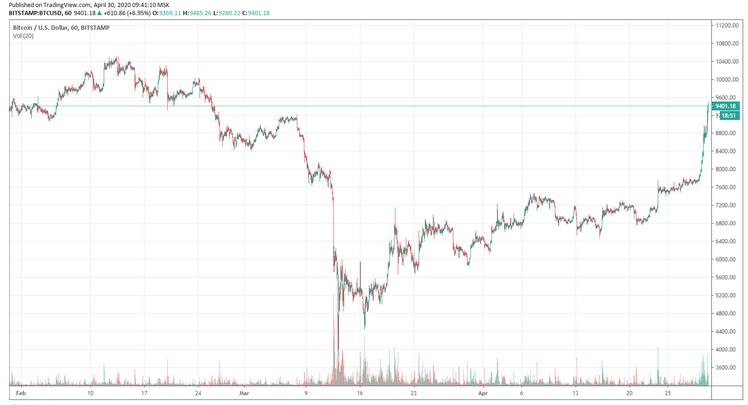 Thus, bitcoin has already surpassed the March indicators and is at the levels of the end of February. During the day, growth was about 20%. 24 hours ago, cryptocurrency was trading at around $ 7,900.

Participants in derivatives trading, apparently, prefer not to resist the upward movement, so that mass liquidation, for example, on BitMEX is becoming less and less.

On the contrary, open interest is growing in dollars, which reflects the desire of traders to side with the buy side or maintain existing positions. The same factor, however, increases the risks of a quick fall as a result of a squeeze of long positions.

Since the collapse below $ 4,000, the price of bitcoin has grown by 150%. As a result, Alex Saunders, CEO of Nugget’s News, notes, Bitcoin has taken a leading position in terms of return on investment since the beginning of the year.

Glassnode analysts developed this idea in their tweet: “In general, the bitcoin market is now in a more profitable state than before the collapse of the course, indicating that investors bought cryptocurrencies at minimums. With overcoming the mark of $ 8,300, 73% of the current volume turned out to be “in the black,” which is 9% higher than the previous time when the price was at that level. ”

Altcoins have not yet managed to support the Bitcoin rally. Having added 7-10% to the US dollar over the past 24 hours, they lost the same amount relative to bitcoin.