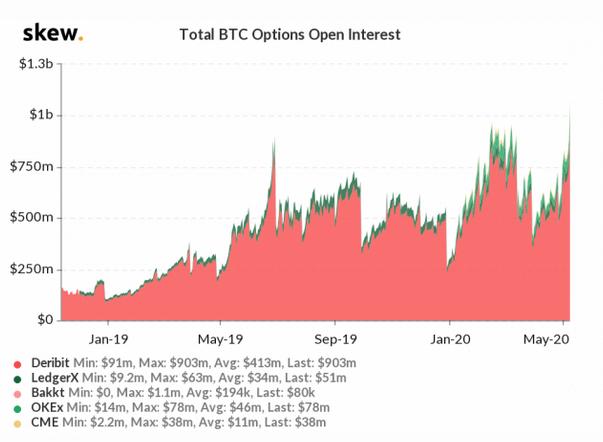 The volume of active contracts in the Bitcoin options market on Thursday rose to a new record high.
Data from major exchanges such as Deribit, LedgerX, Bakkt, OKEx and CME indicate that open interest on options yesterday exceeded $ 1 billion, surpassing the previous maximum recorded on February 14.
The indicator rose significantly from the March lows of about $ 410 million, when Bitcoin experienced a rapid collapse. More than 90% of the current open interest in bitcoin options falls on the Paniban Deribit exchange.
The trading volume of bitcoin options also jumped on Thursday and reached $ 213.8 million, which was the highest value since March 12. The price of bitcoin at the same time exceeded the level of $ 10,000.
According to CoinDesk, the observed dynamics is related to the demand for put options, the holders of which rely on lowering the price of bitcoin, hedging against the risks that they see in the upcoming halving.
“After the March collapse, put options were bought up primarily in order to protect against the risks of a further fall. As the market rises, traders are increasingly gaining put options, ”said Deribit analyst Tony Stewart.
“We can see a pullback of 25-35% of the peak. I expect that this will be followed by a period of trading in a clearly defined range for several months, after which growth will resume. The long-term outlook for bitcoin seems extremely bullish, but in the short and medium term, we expect great disappointment for market participants, ”said Ed Hindi, investment director at Tyr Capital Arbitrage SP.
Alexey ShternshisPi
Capital Union